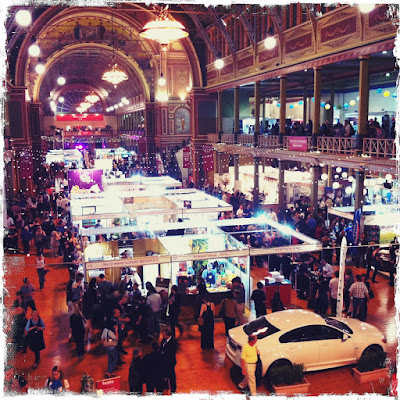 So I'm pretty slow in getting this post up on the blog.  Unfortunately the Gang and I have all been hit by various illnesses this week so I haven't been up to blogging about food, but here it is - my take on the kid-friendly experience of The Taste of Melbourne Event 2011. 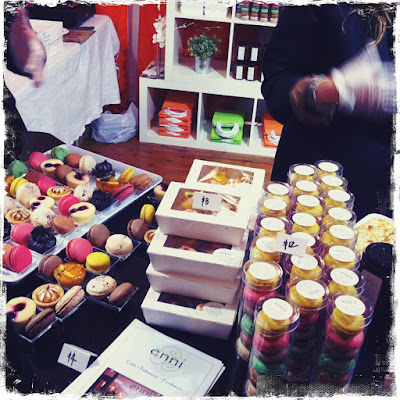 For those not familiar with the event, it is essentially an exhibition of food and wine by restaurants and providores in the industry to display, demonstrate, sell, and let you sample their wares.  As I explained it to Little One, it's kind of like the Royal Melbourne Show food Hall, but with fancier food.  The mainstay of the event involve well known restaurants in the Melbourne dining scene offering up to 3 dishes each (usually, but not always, an entree, main and a dessert), scattered amongst displays of goods as varied as wines, cooking equipment, chocolates, produce and cheeses.  There are also cooking demonstration, talks by renowned chefs, "classes" in cocktail and coffee making and more.  The currency of the event are "crowns", which are equivalent to the Australian dollar, and can be bought at the venue as well as prior to the event.  The entry fee is $30 per adult excluding food, although there are quite a lot of competitions for tickets and 2-for-1 offers around before the event.  The Taste of Melbourne is held at the Royal Exhibition Building over 4 days and attract many visitors, local and afar, for this unique taste experience. 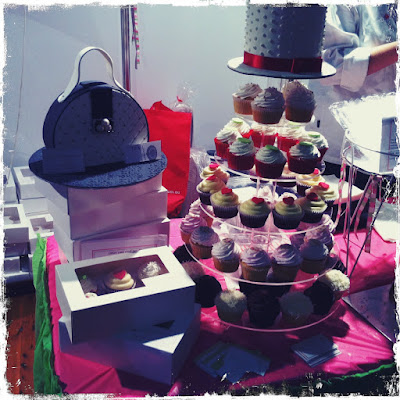 We previously came to The Taste of Melbourne 2 years ago.  Last year we had to give it a miss, as giving birth to Bubs at the event might not have been very savoury for anyone involved, and this year we decided to take Little One along for the experience.  We never took notice that this is actually quite a kid friendly event!  Children aged 6-12 are charged $12  for admission and kids 5 and under for free. 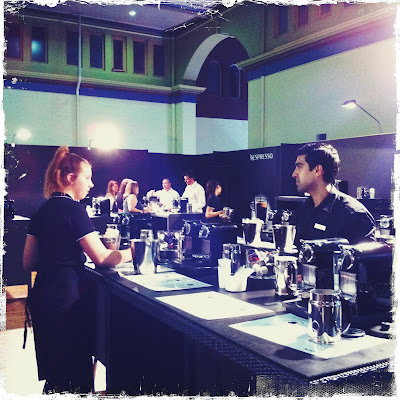 First up we watched Alvin from Masterchef cook a Malaysian dish, while he "dished" goss on his Masterchef experience.  Little One was quite star-struck to have a photo taken with him. 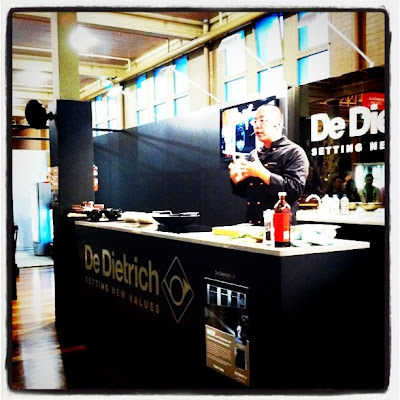 The first thing we bought with our crowns was the KFC "Fried chicken" from St Katherine's.  This was highly recommended and indeed lived up to its reputation.  Very tasty, slightly spicy, Little One only had a small piece due to the spice but it was a great starter for us. 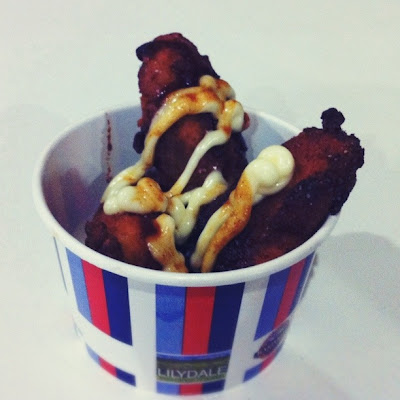 The Carpaccio of Farmed Barramundi with peas, mint and wasabi sorbet from Esposito and St Peter's was another winner.  Fresh, healthy and sustainable, Chef Maurice Esposito's entree dish was also a good size.  Delicious!  None for Little One who's not ready for raw fish yet. 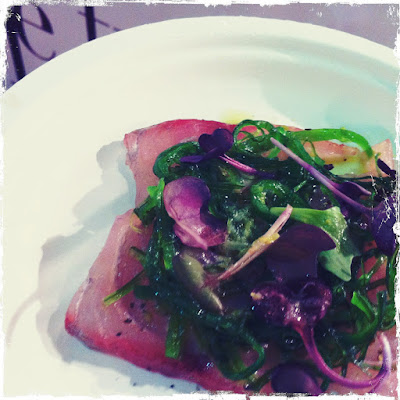 Little One loved the Slow Cooked Suckling Lamb, Pearl Barley Salad and Truffled Pecorino from Sarti.  Delicious and very easy on the palate for the Little One. 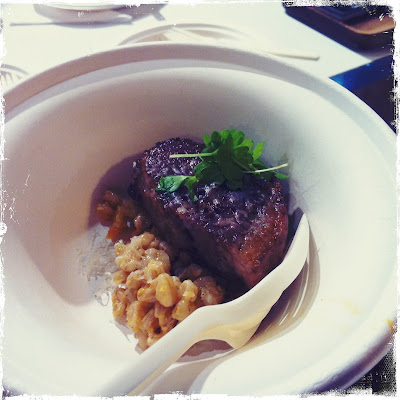 The Botanical's Wagyu Burger was much anticipated by Hubby.  While it was pleasant it did not turn out to be spectacular.  He was disappointed to report that it was "nothing special". 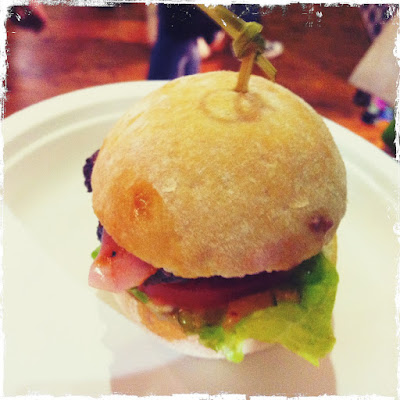 The Pulled Pork Panini from The Kitchen Cat gave us mixed emotions.  The panini was way too tough and it was quite difficult to eat it with any decorum.   However the pulled pork was cooked perfectly.  In the end, eating it "deconstructed" was the way to go. 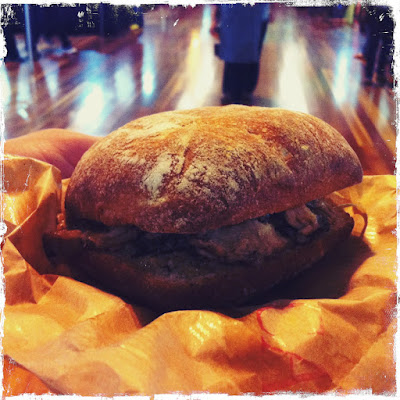 In contrast the Grilled Pork and Fennel Slider with Mustard Mayo from The Stokehouse was a surprise winner.  The slightly sweet brioche bun worked well with the flavours of the pork and the mayo.  The great texture and taste made us want to go back for another! 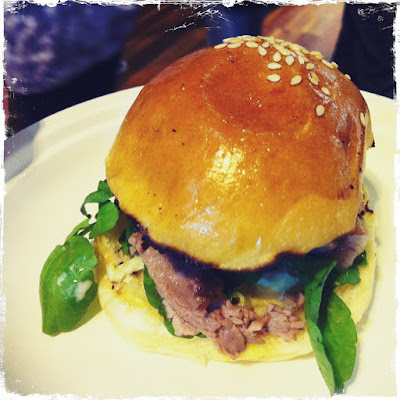 Being non drinkers with a child, we were pleased to find that Nudie Foods and Murray Valley Citrus both offered non alcoholic drinks, and were ultra-friendly with Little One.  After hearing the praise for Rekorderlig Cider from people we know I tried the Pear Flavour.  This was indeed very nice and easy to drink, even for a near-teetotaller like me! 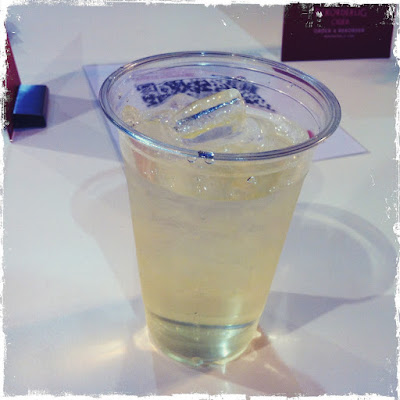 Having done very well in trying nearly everything we got, Little One was eager for dessert.  We grabbed a couple of mini ice-creams from Gundowring Ice-Cream.  Kid-friendly?  Oh most definitely yes! 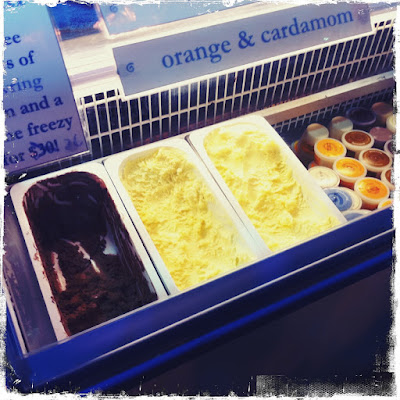 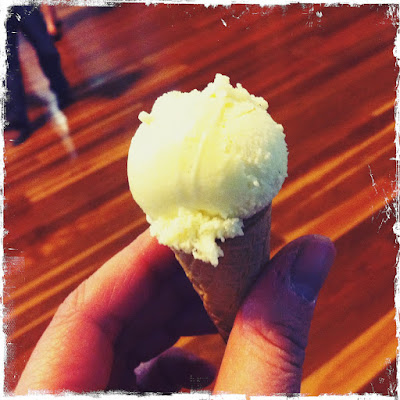 We would've liked to sample some of the awesome sounding desserts on offer from the restaurants but unfortunately had to leave as one of the kiddies at home was sick (and so began our week of illness!)  I used up our left over crowns on some little tubs of Gundowring Ice-Cream to go, and also some Ice-Cream Sandwiches from Pat and Stick's.

Eat.Play.Shop.Says : The Taste of Melbourne is a surprisingly great event to take kids, perhaps more enjoyable for the older ones.  I certainly had a great time showing and watching Little One try some different and interesting foods.  This is an annual event, so maybe you can plan ahead for next year - if the night sessions are too late there are also lunch time sessions on Thursday through to Sunday!