Hands up those who've been watching The Great Australian Bake Off?  I love watching it, especially whilst on Twitter as it's like watching a good show with a whole bunch of witty friends.  The down side of it is that I'm always hungry and hankering for some of the baked goodies that are happening on the screen.  A few weeks back they had an episode on tarts and it reminded me that I'd been meaning to try making a tarte tatin.  I've been thinking about it since I had a slice of Nadine Ingram's awesome pear tart at Flour and Stone when I visited Sydney earlier in the year.  In no way was my tarte tatin as yummy as that, but it was delicious, easy to make and the family gobbled it up in the blink of an eye! 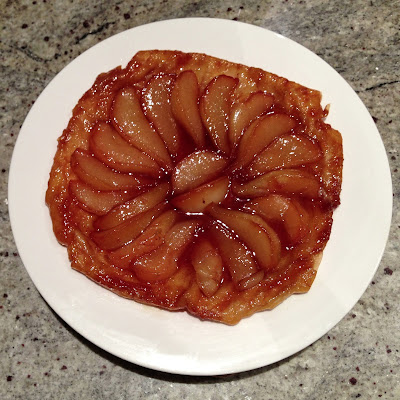 1) Heat the oven to 200 C (fan force) and cut the pears into slices
2) Melt the sugar over medium flame in an oven proof pan/skillet until slightly brown/caramelised - don't stir, but instead just agitate the pan as the sugar melts
4) Take the pan off the flame, add the butter and vanilla and stir to melt
5) Arrange the pear in whatever pattern you like on the pan, return to a medium flame for 5 minutes or until the pear is soft (becomes slightly translucent) and remove from heat
5) Cut your rolled out puff pastry with a sharp knife to just fit over the bottom of the pan. Place the pastry over the pear in the pan and tuck the sides in
6) Put the pan in the oven and bake for  20 minutes or until the pastry is slightly brown and puffy
7) Remove from the oven and rest for 5 minutes, put a large serving plate over the pan and flip, so that the tart sits on the plate pear-side up
8) Spoon over any remaining caramel and serve with a dollop of ice-cream 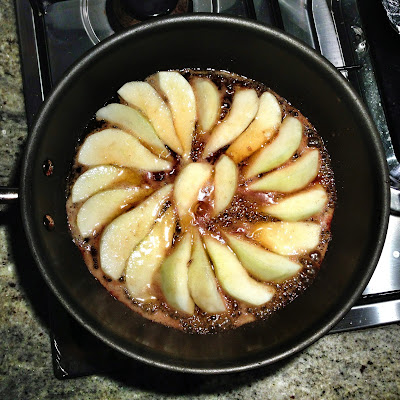 Posted by EatPlayShop at 8:19 PM