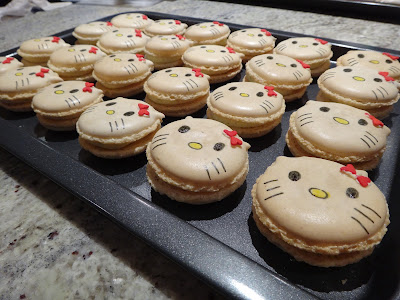 I haven't written a post on macarons for a quite a while.  And the reason is THIS : I didn't really want to  write this post.  I felt discouraged, and worst of all, I was embarrassed I felt this way, after this particular batch of macarons.  This was made for a fundraising bake sale for one of the kidlet's extra-curriculum activities.  We were asked to bring along baked goods to sell, and thinking that I didn't want to be the umpteenth parent to bring cupcakes, I decided I would bring along some Hello Kitty Macarons since my recent successful trial run was well received.  The event was being held on a Sunday afternoon, so despite the crazy juggle of weekday activities, I made time to bake on a Thursday evening so that the macarons would have matured nicely by Sunday. 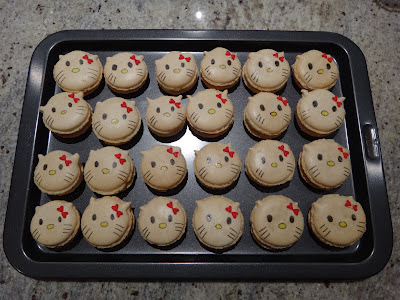 Instead of obsessing about how to keep Kitty's bows aligned, I should have thought harder about the target audience.  Parents and kids commented on the cute Hello Kitties on the day, but I don't think a lot of people there knew about macarons, let alone the effort it took to make them.  Most of the kids spent their money on bags of squashed brownies and cupcakes, whereas the parents went for the bar cakes.  (Chocolate, I should have made something chocolate!!!!)  Yes, sadly  lots of unsold Kitties came home with us!

I admit I felt pretty ordinary that day.  And then I felt even more awful that I had felt awful.  After all, it's not about whether my baked goods sold or not, it's about raising money!  Fortunately my Hubby and kids are my most appreciative audience, and Macaron Monster would have eaten the whole lot we brought home if I hadn't stopped her, bless her heart.  Watching her happily munch on the macarons made me feel happy again - SHE is my intended target audience after all, and why I started baking these tricky little diva treats to begin with!

Lessons Learned - This entire selling macarons thing was a lesson learnt.  I think I won't be giving up my day job in a hurry!