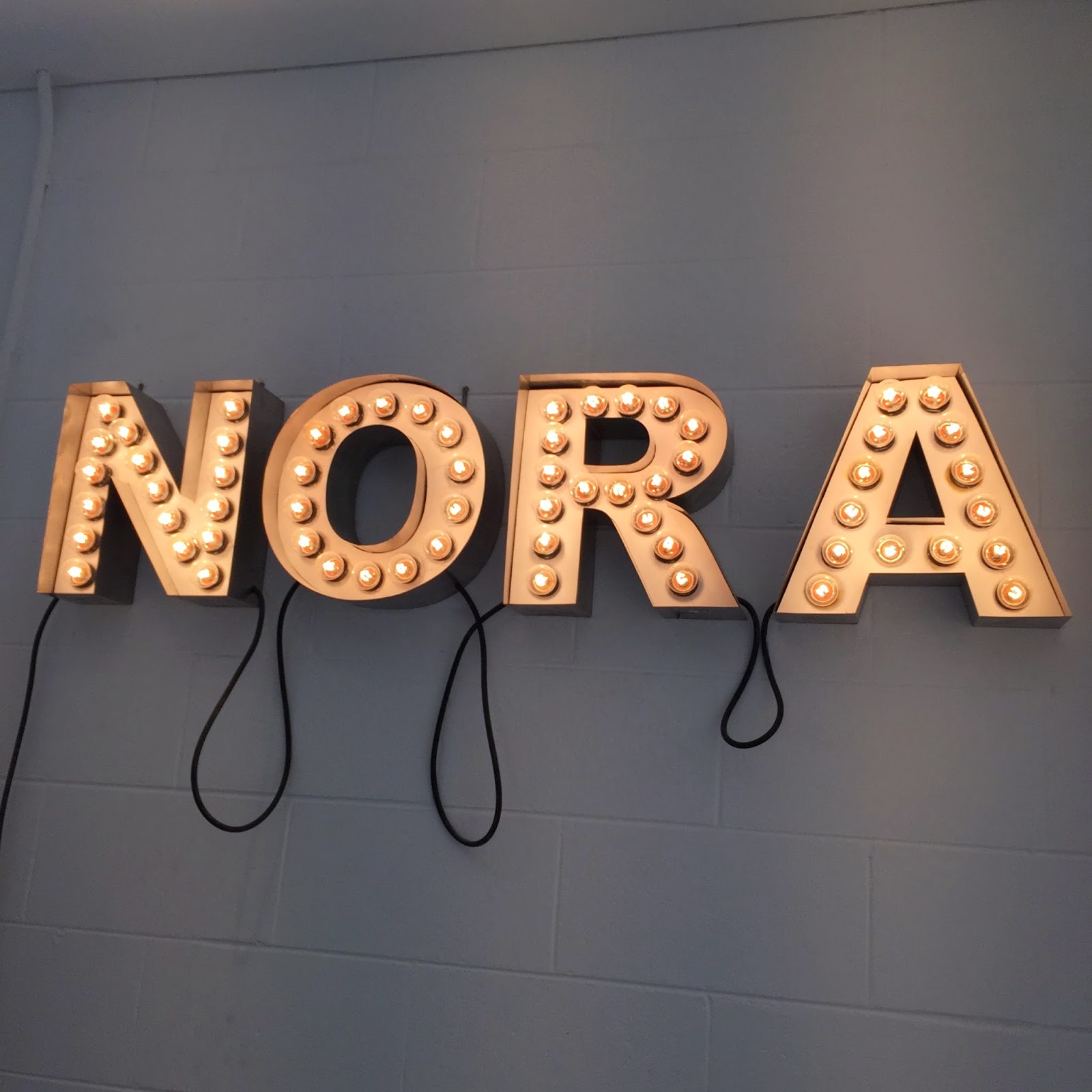 I visited Nora on a "Me-Date" recently and had a lovely coffee, breakfast and of course, some of their famous charcoal tarts to go.  The team behind Nora had been supplying their distinctive tarts to a few select Melbourne cafes to rave reviews and I was really excited to try their Thai inspired interpretation of breakfast and lunch dishes. 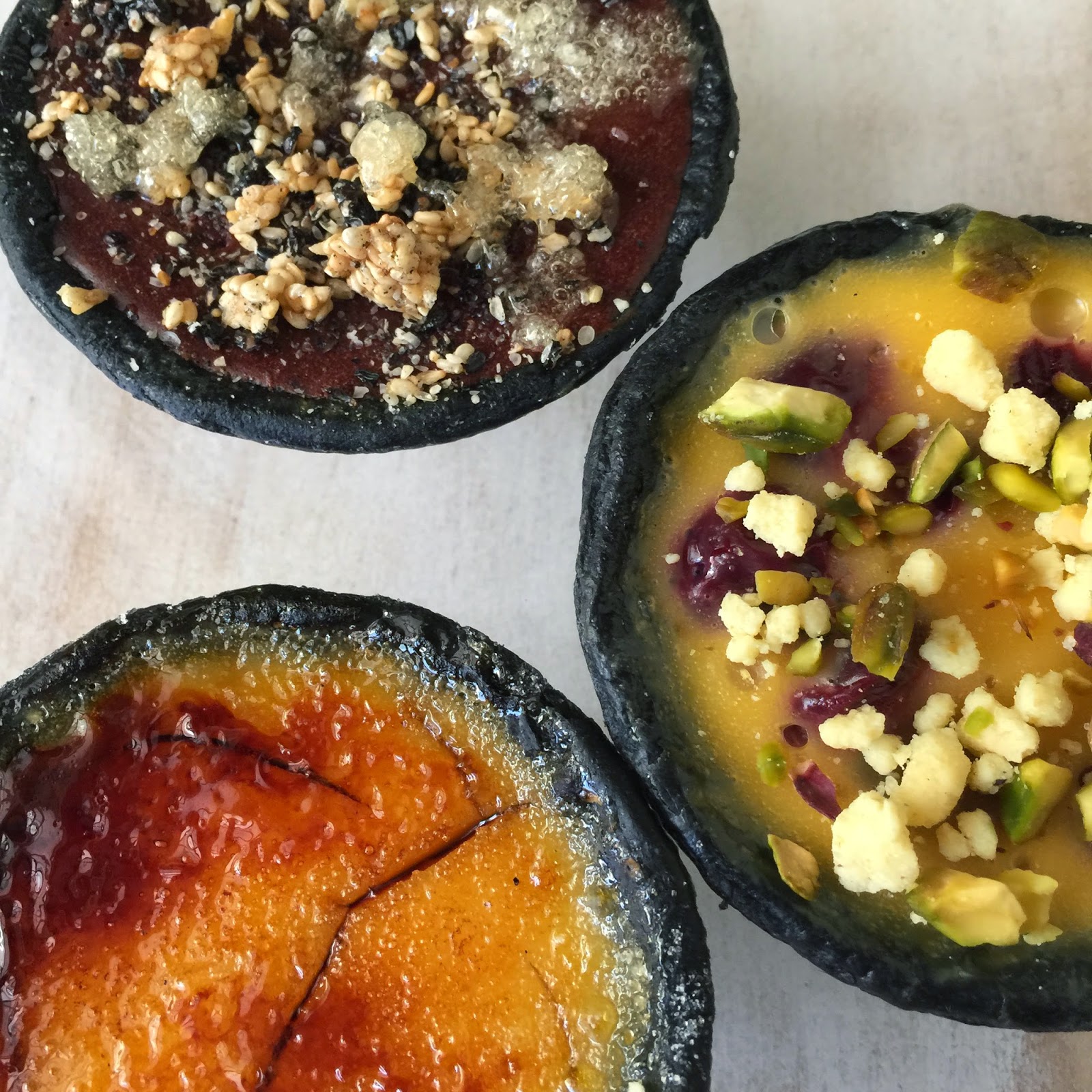 I got there at 10am on a Thursday morning but the cafe was already full so I got to admire the display of their "tarts of the day" artistically set up with their ingredients. 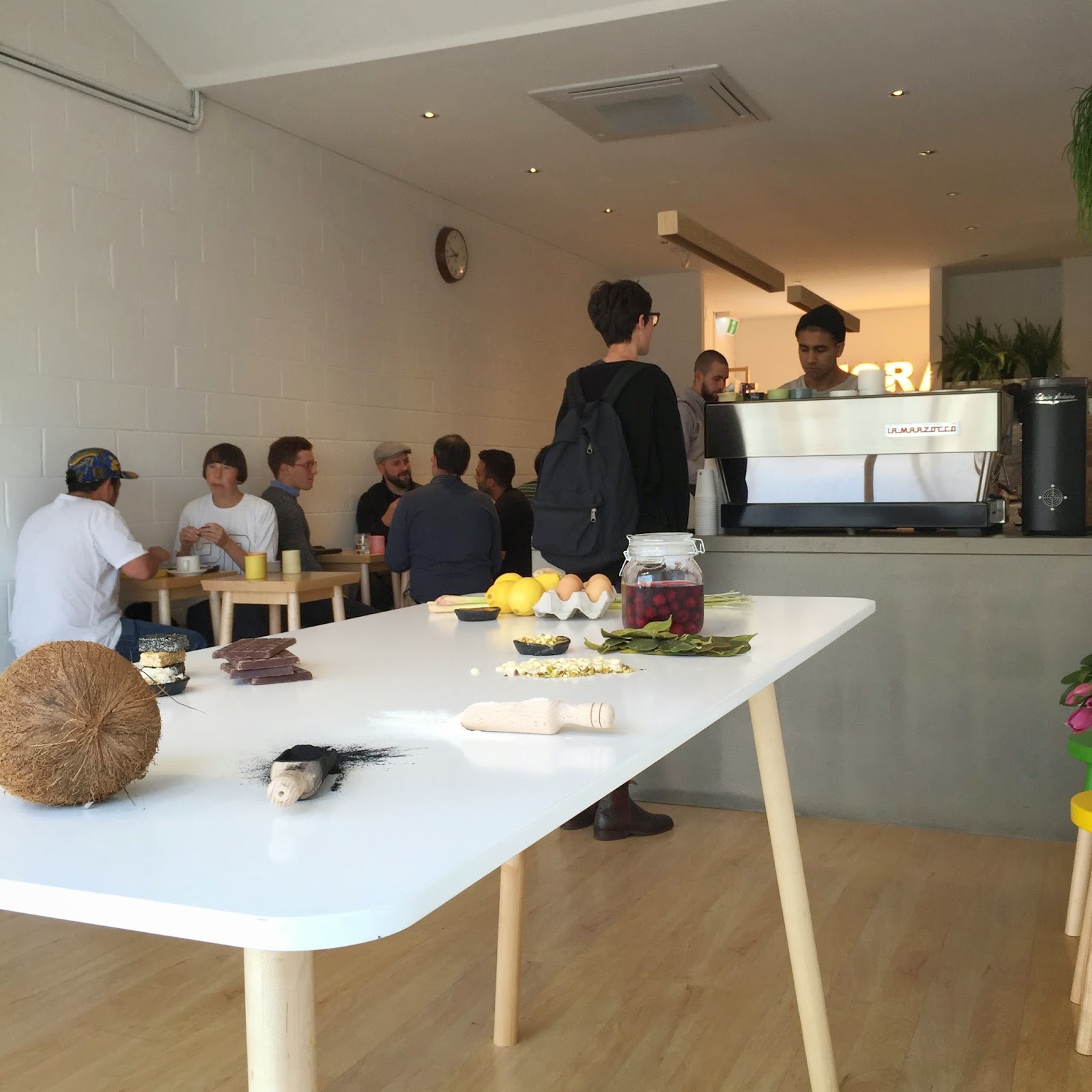 Once I was seated I ordered a coffee.  They don't serve mochas so I had one of my rare cappuccinos ($3.8). 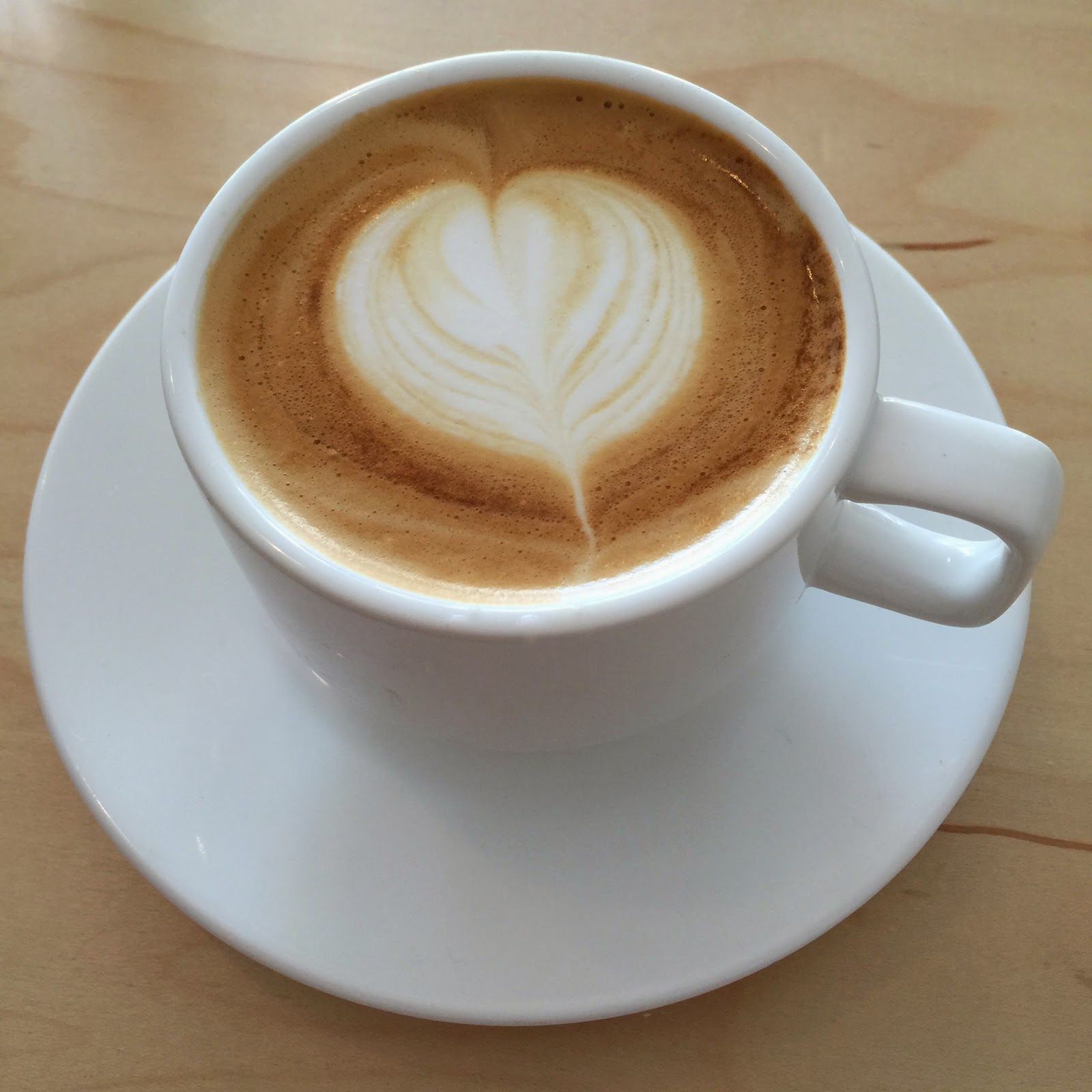 I perused the menu, and each dish is named for one ingredient, which is then followed by a few other ingredients in the dish, in a similar vein to the menus at Estelle Bar and Kitchen.  I chose BACON, onion consomme, rice, pickles, corn ($18) and to be honest I had no idea what would be conjured with these ingredients.   Fortunately what arrived was a beautifully plated dish with surprising interpretation of the ingredients.  The bacon was more of a slowly cooked pork belly, the corn was in the form of young shoots, the onion were tender caramelised rings, and the rice was a finely ground sprinkle that gave the dish a grainy textural contrast. 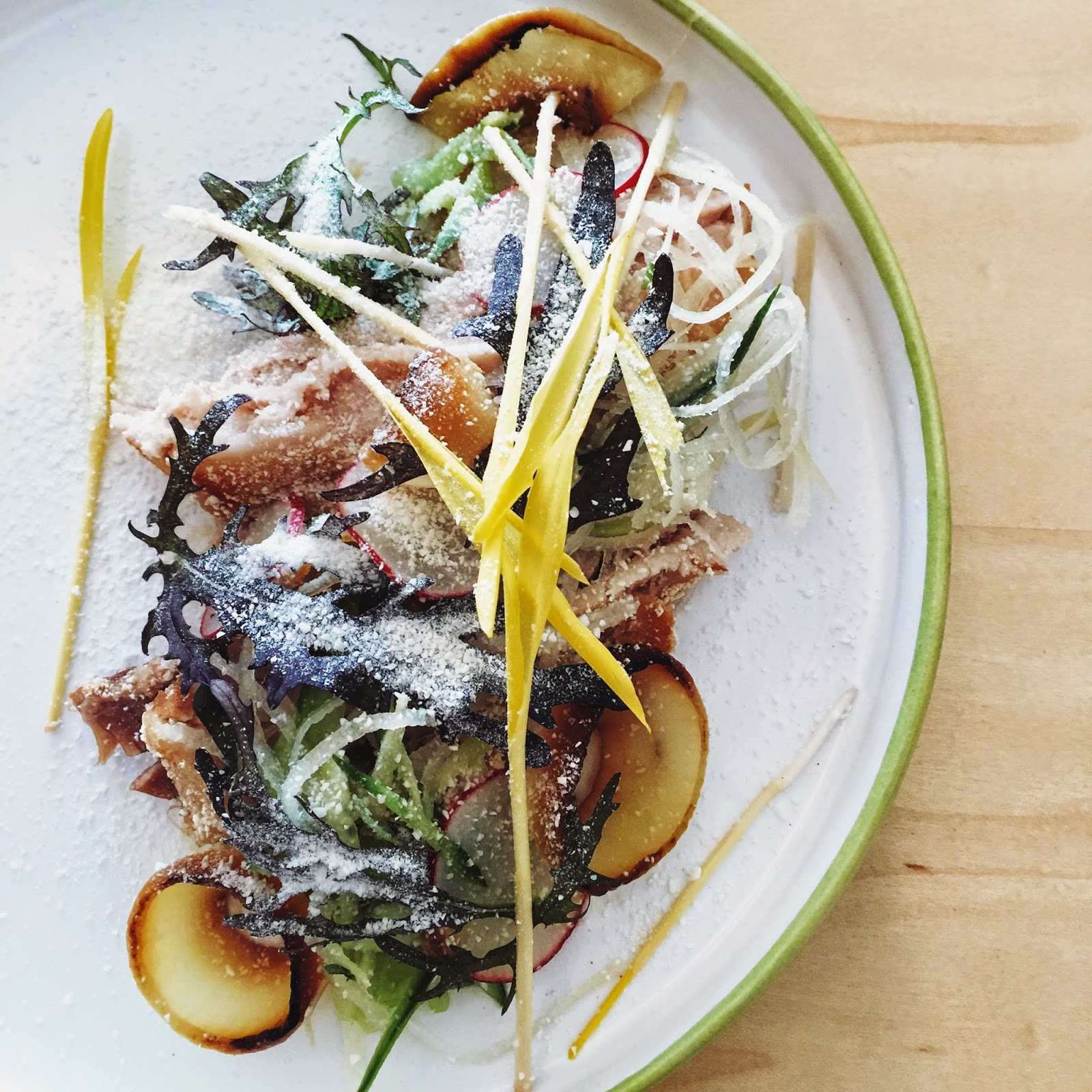 It came with a side serve of what looked like a popover, which provided some bready carbs to the dish. I appreciated the depth of thought and the chef's clever handling of the individual elements involved in the dish, and the experience was immensely enjoyable. 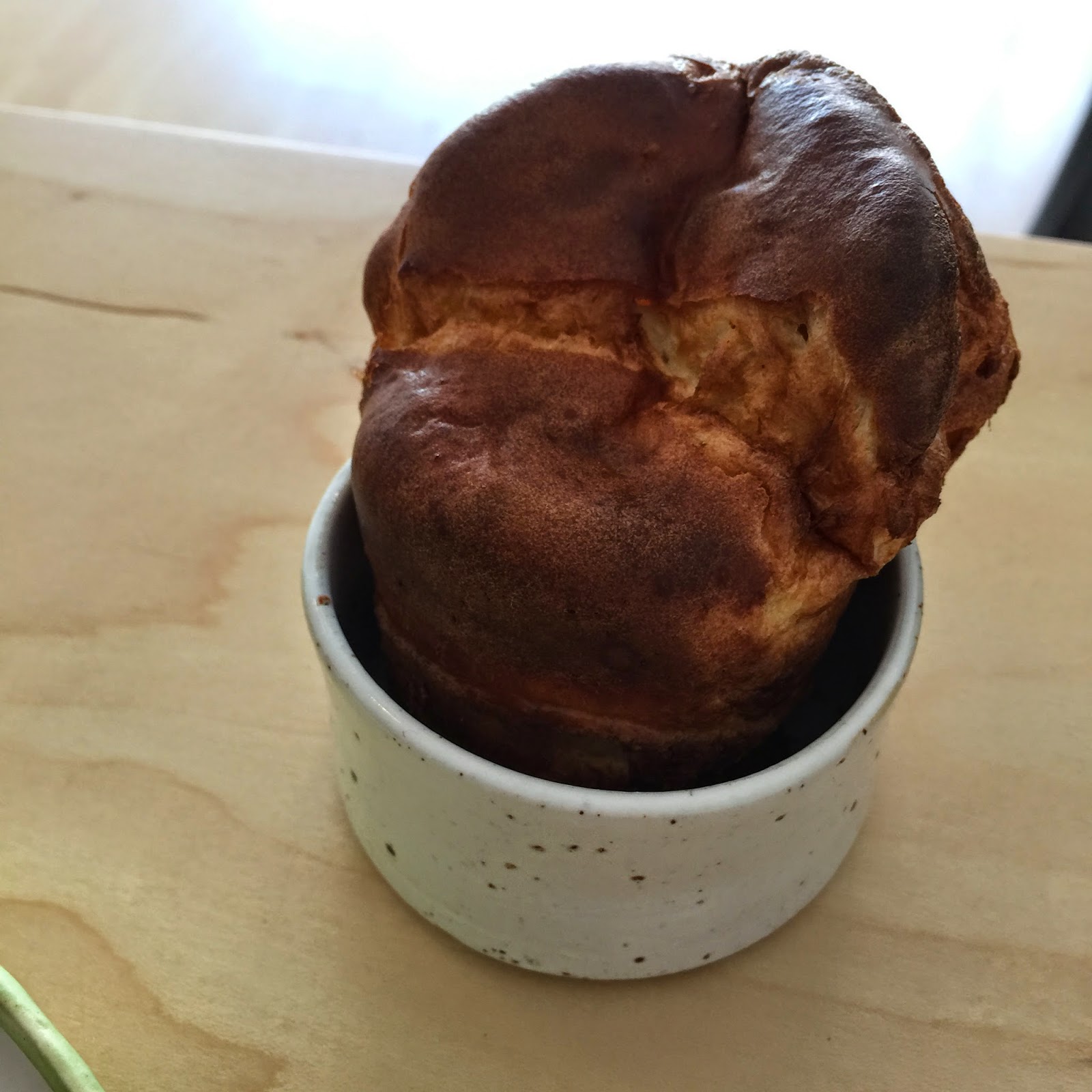 Of course I had to have some of the tarts ($5 each), and instead of having to choose one, I got one of each and took them home to share with the gang.  (Best Mum of after school treats I am!)  After I took a million photos first of course! 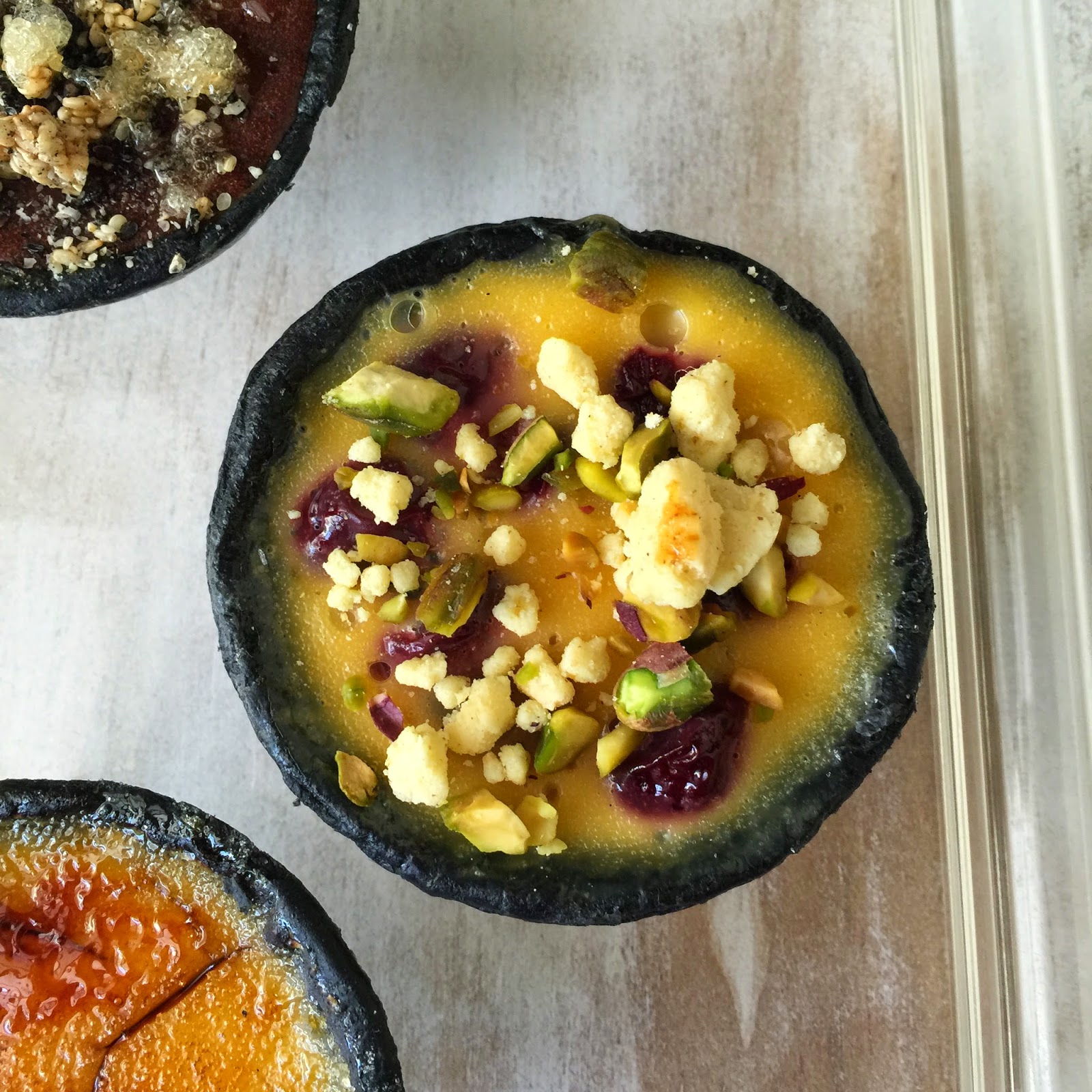 From the display, the first tart was made with dark chocolate, sesame, and I think this was topped with a sugary honeycomb. 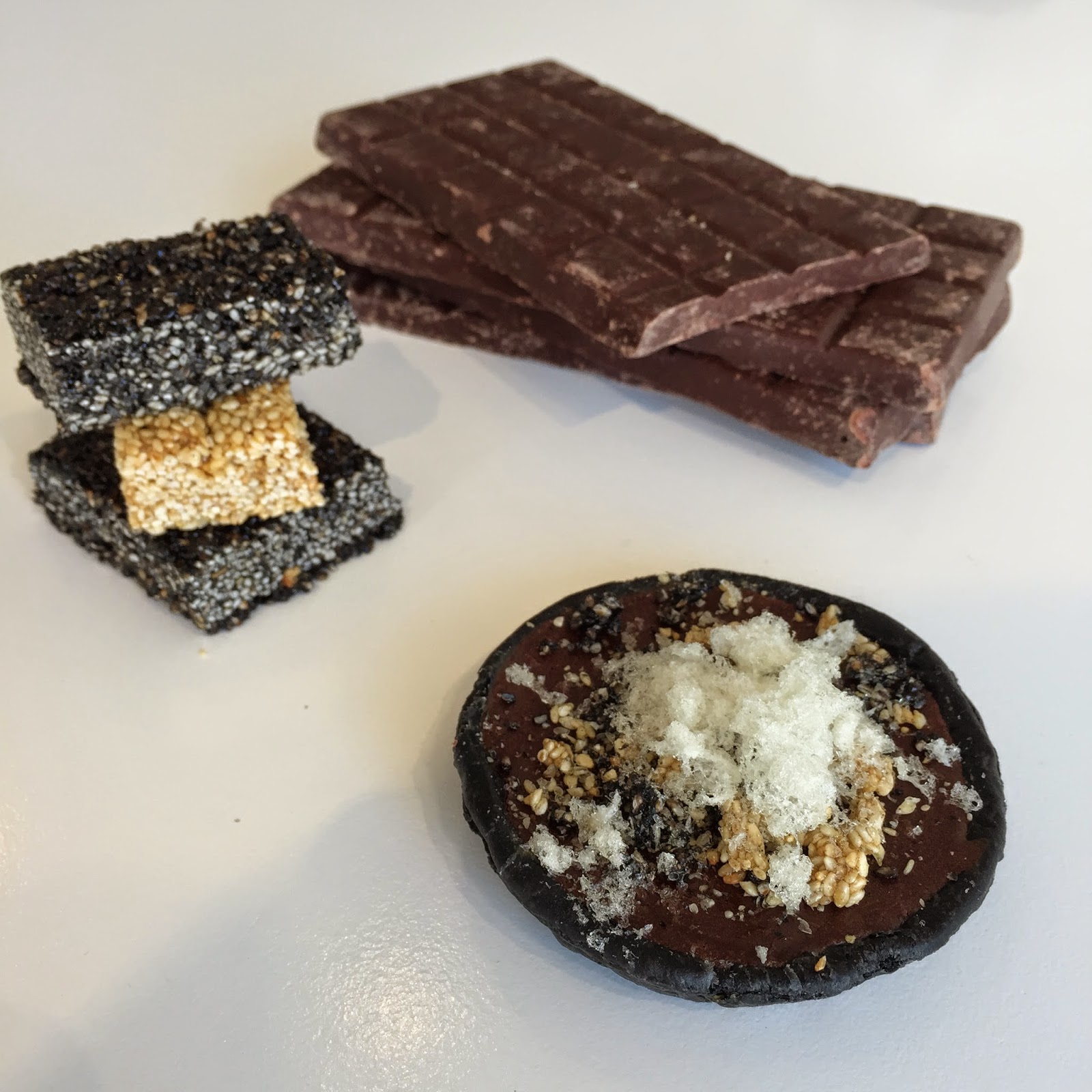 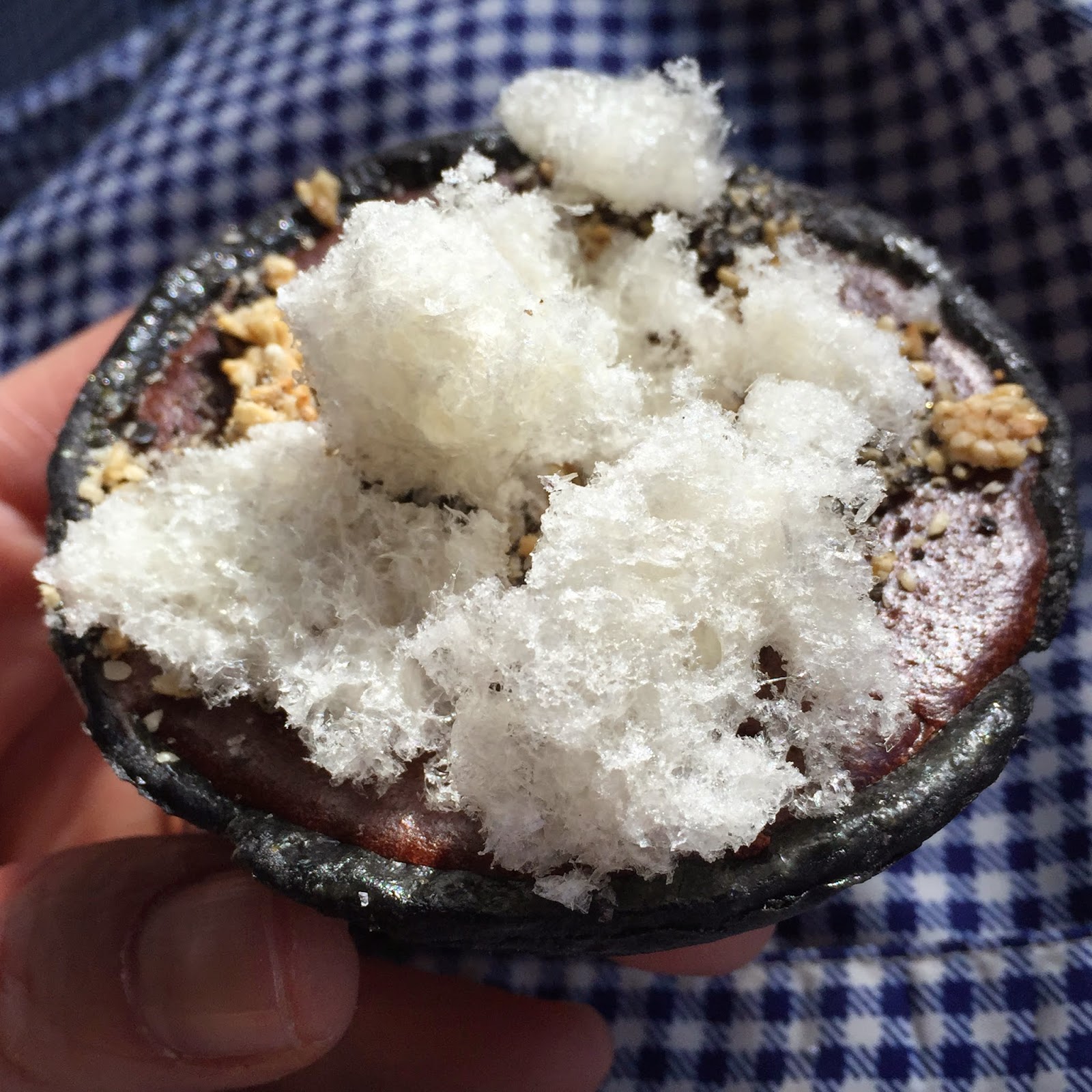 The second tart had white chocolate, pistachio and cherries. 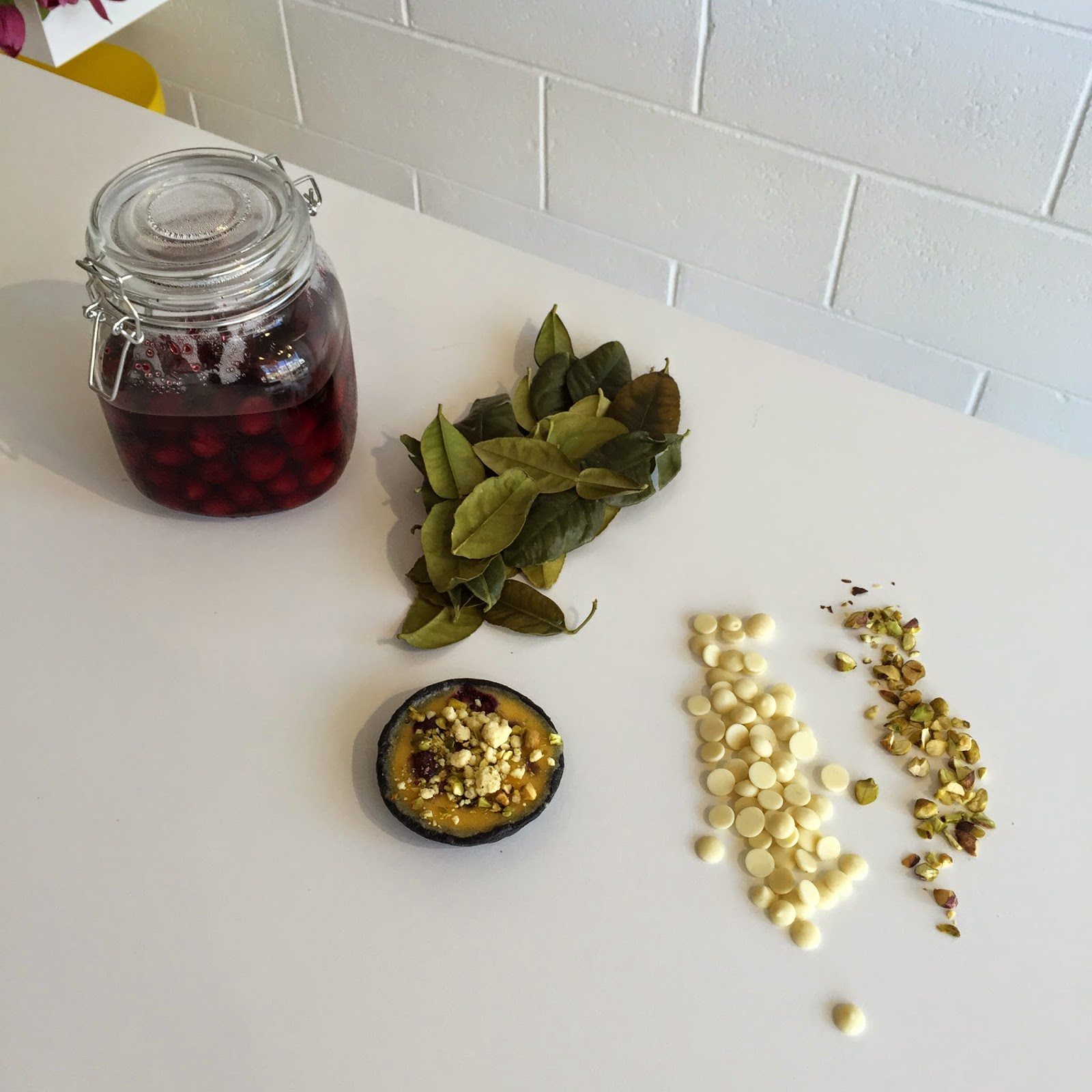 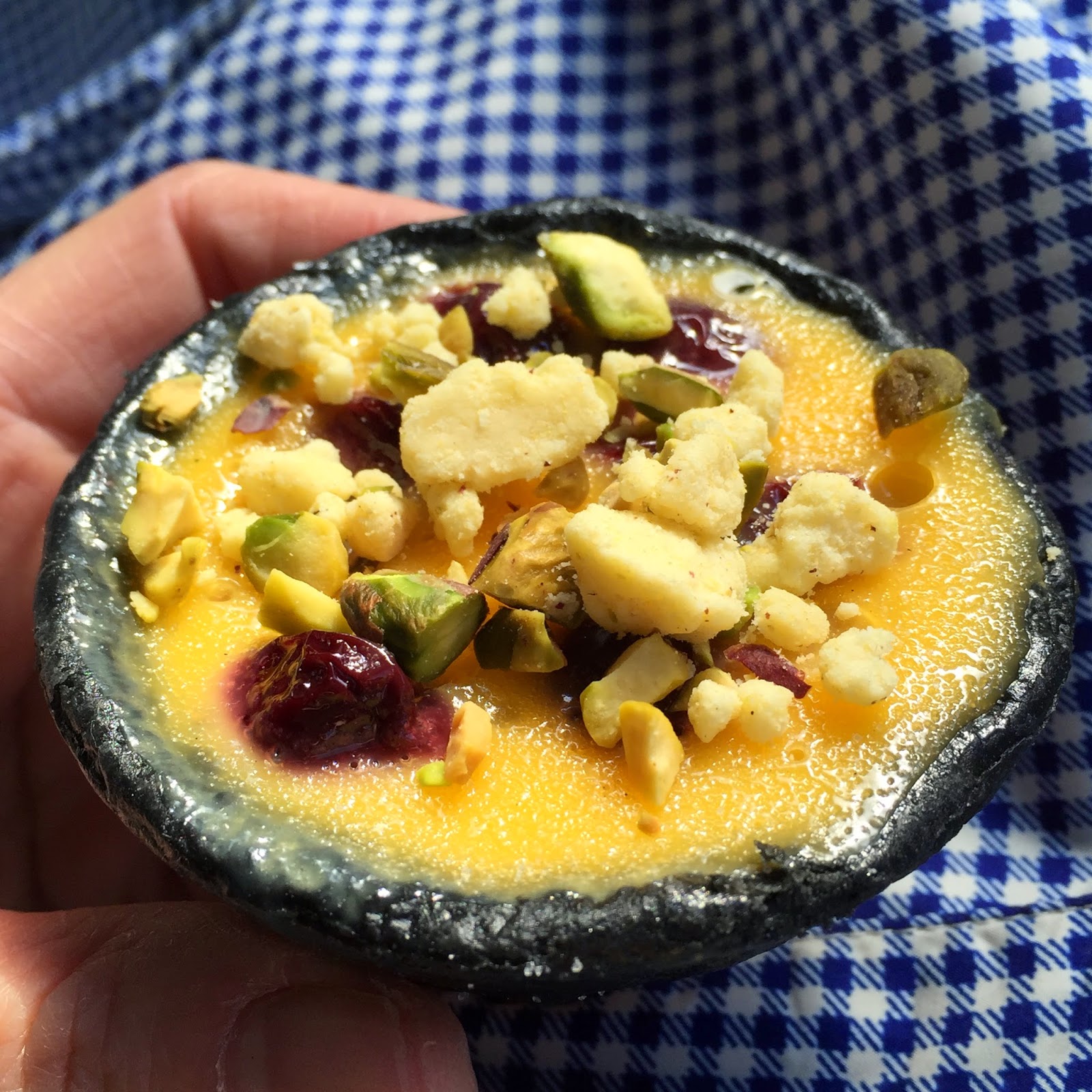 And last but not least a lemon ginger and lemongrass brulee tart. 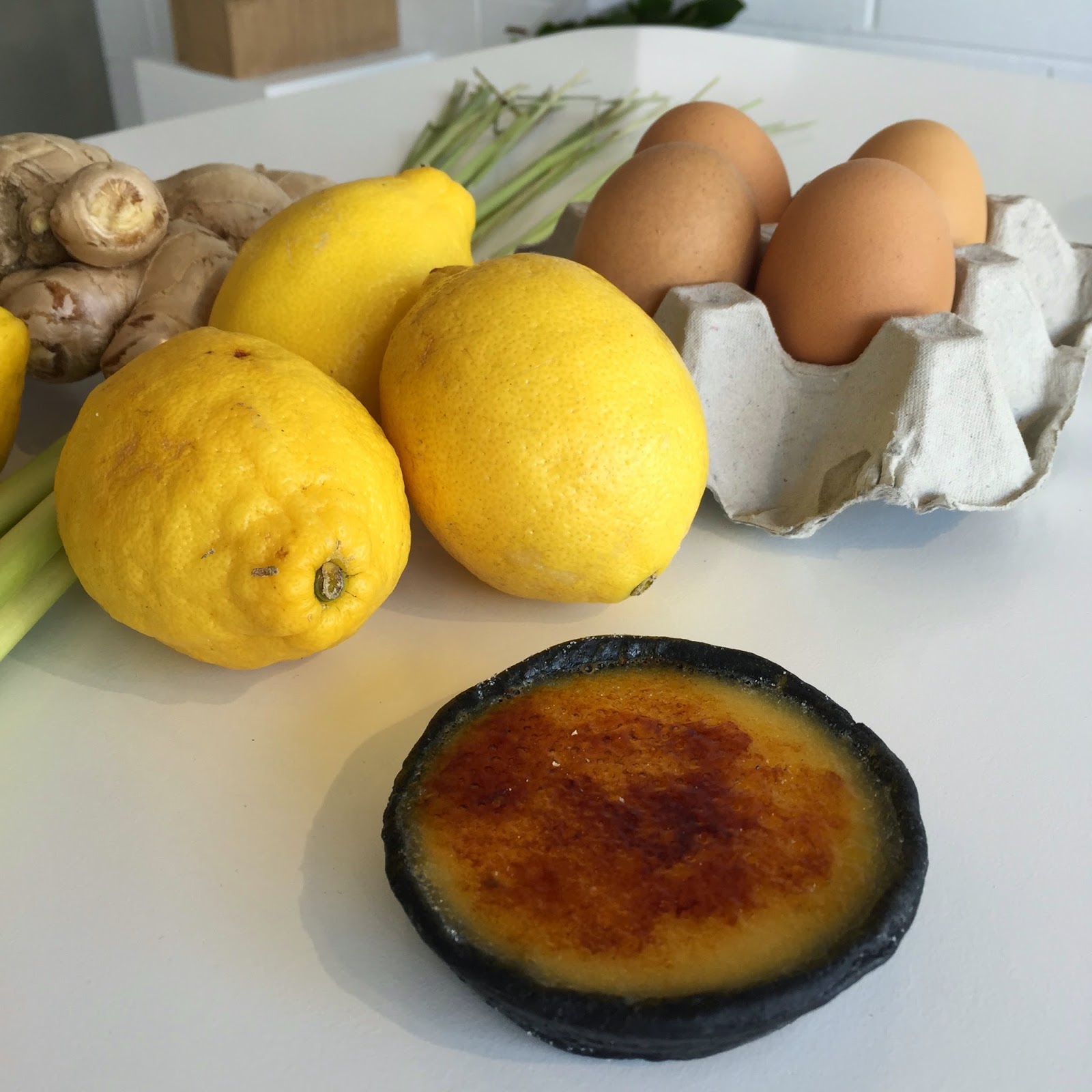 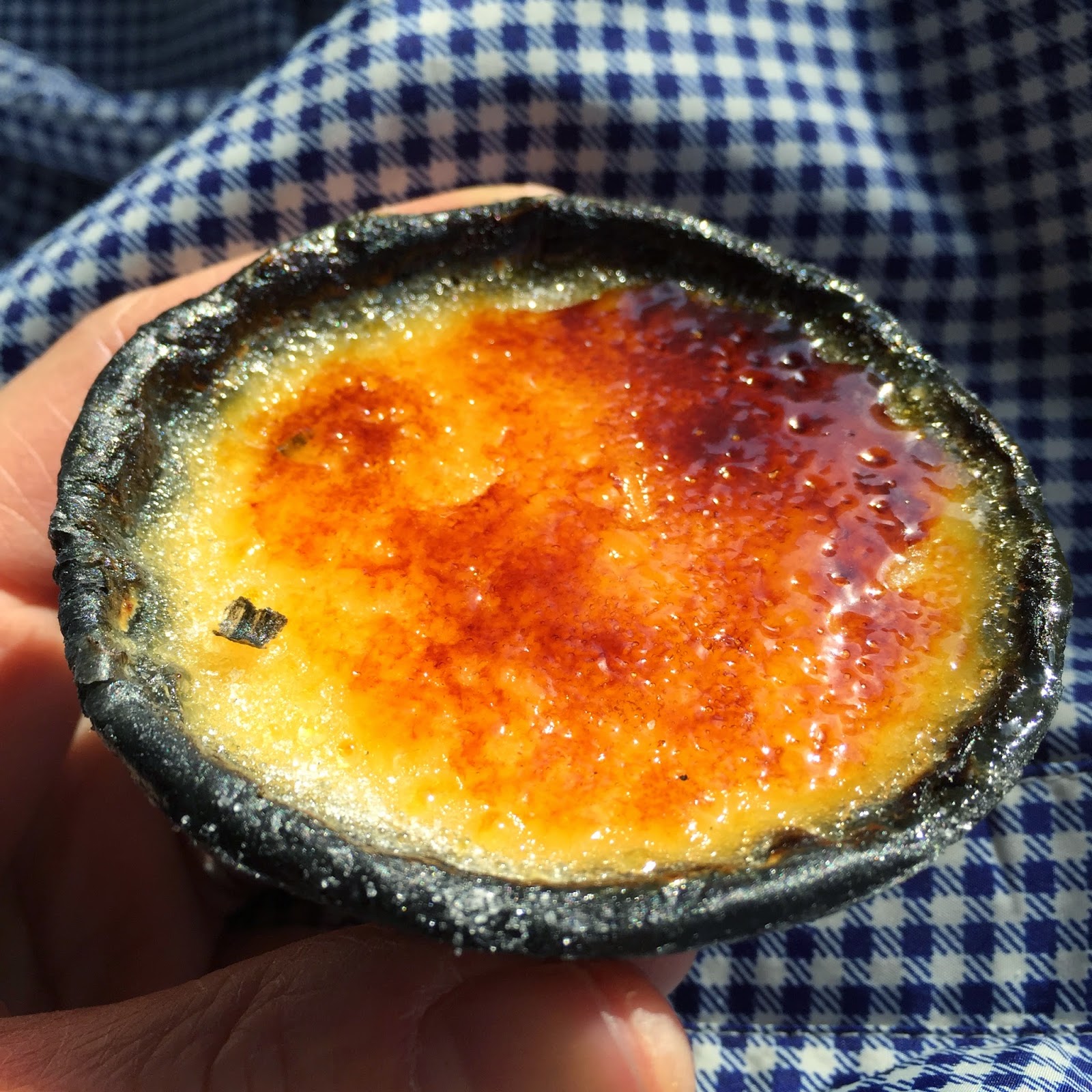 We all enjoyed the tarts.  The charcoal, made from coconut husks, gave the tarts their distinctive and striking black colour, but was surprisingly mild in flavour and worked well with the lightness of the pastry.  The filling were interesting and the flavours were complementary.  If Nora had been around when I was still at Uni I can guarantee I would've spent a lot of time there getting fat eating tarts to my heart's content.  I envision many future visits, if only to grab some of those yummy tarts on the go if I can't get a table! 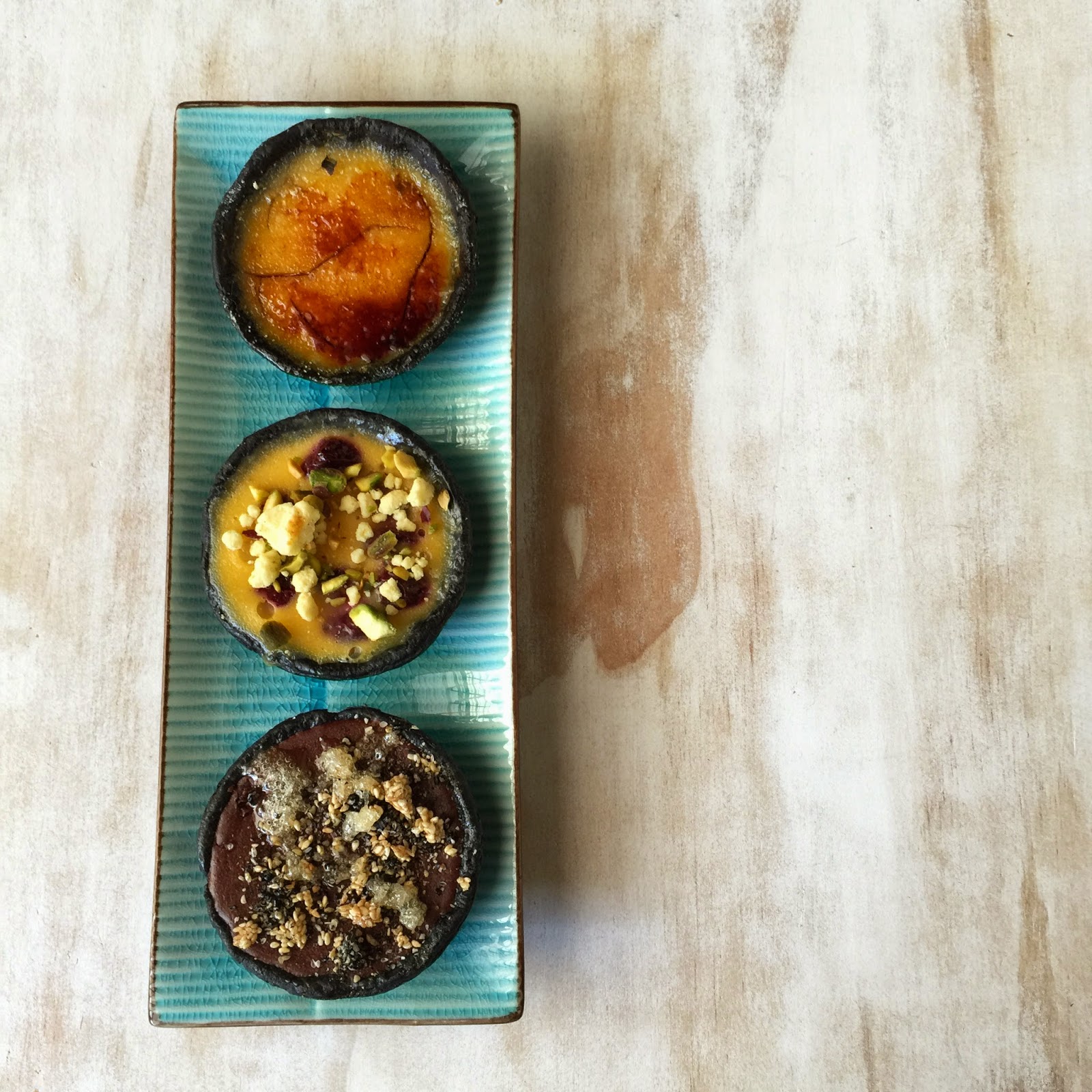 Posted by EatPlayShop at 4:45 PM